Today every business is or will be a software company. Therefore, one of the crucial assets a business has is the data and intelligence-laden applications that virtually keep the entire business running in the real world. Regardless of companies using monolith apps, leveraging microservices, or going entirely cloud-native – the growing number of data sources and the core need to evolve without losing a breath – requires digital freedom.

Cloud Foundry is one such technology solution that allows development teams to create new software with agility, significant time savings, and resources to experiment continuously in an ever-evolving market. To illustrate, Cloud Foundry users save nearly ten weeks and $100,000 on average per application development cycle . But what is it? And why do businesses – from small to large – need Cloud Foundry in the first place?

This introductory blog will walk you through an overview of the fundamental business impacts and the reasons CF users love it.

What is Cloud Foundry

Cloud Foundry is a collection of APIs and implementation of core services to offer a cloud-based Platform as a Service (PaaS) on top of a virtual infrastructure, such as an IaaS. The platform supports the Microservices architectural style. As an open platform, all service implementations can be replaced by more adequate versions, for example, by a high-performance version supporting massive clustering.

Cloud Foundry offers services that automate the steps needed to deploy and scale cloud-based applications, supporting a DevOps model where a solution’s development and operations go hand in hand. It was initially developed as a Java PaaS for Amazon EC2 by Chris Richardson, in 2009 acquired by SpringSource, which was then acquired by VMWare, then handed over to Pivotal.

Compared with other PaaS offerings, Cloud Foundry has some unique features:

That said, when talking about cloud offerings, terms like IaaS, PaaS, or SaaS are used frequently. It is thus important to distinguish the various types of offerings because they are involved when using Cloud Foundry.

Cloud Foundry provides an extensible architecture and core components for a PaaS offering. Primary users are, therefore, developers and administrators of solutions and SaaS offerings.

Developing an application in Cloud Foundry

After installing the CLI (cf command), we connect it to the Cloud Foundry instance by entering the API endpoint and log in. Our primary considerations here include checking the organization’s spaces to understand which build packs are available (for the choice of programming language) and which services are offered in the space. 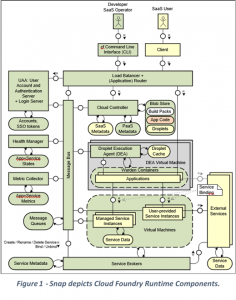 Deployment and Execution of Applications in Cloud Foundry

Cloud Foundry supports the polyglot approach of microservices by shifting as much deployment logic as possible into the so-called Build Packs.

A typical deployment of an application on Cloud Foundry takes place in the following order:

Several projects and cloud services at SAP are currently evaluating/integrating into Cloud Foundry as mentioned above.

SAP XS2 is the new platform for non-ABAP applications with HANA supporting a polyglot application development model of micro service-oriented cloud applications. The XS2 cloud deployment holds Cloud Foundry. Hybris as a Service (YaaS), for example, is a SaaS commerce offering using a microservices architectural style on Cloud Foundry. This involves the creation of several services on a different level (Core services, which are domain agnostic such as a document repository, and Commerce Services such as a Shopping Cart of a Pricing service).

SAP Cloud Platform (SCP) is a PaaS offering for customers and partners. The CF@SCP project works closely together with hybris as a Service (YaaS) on integrating Cloud Foundry service APIs in SCP. 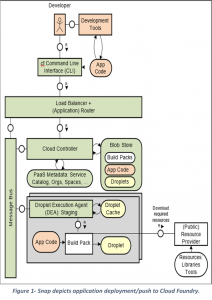 The freedom to create

The diversity of thought, experience, innovation, and ideas is what makes the digital ecosystem stronger against constant disruptions. Cloud Foundry automates almost everything and therefore gives developers the freedom to focus on innovating and creating apps that solve real-problems with quick app development cycles – within a few days or weeks rather than the traditional months (or years!).

Does migrating SAP applications to Azure save costs?

Maximizing your ROI from Salesforce with SFDX

Pros and cons of managing applications on the cloud vs. on-premise

The motive behind using Landing Zones for seamless large-scale migrations

Scaling growth with Landing Zones on the Cloud

Why go for a Serverless Data lake architecture

YASH Technologies has a span history of growth and success.

Thank you for your message. It has been sent.
X